«Moderation is a fatal thing. Nothing succeeds like excess.«

One of the truly great obstacles on our path to optimal health is the solid belief in the golden mean or everything in moderation. Rarely have such an inadequate and useless thought been given so much undeserving acceptance.

The belief in a dietary golden mean seems based on a lack of knowledge. But it is understandable that, when faced with the choice of two seemingly extremes, we choose a desirable mean. This thinking has probably saved many lives throughout history. But when it comes to diet in a modern world, it is poor guidance.

«I hear both carbs and fat are fattening, so I try to eat a little of both. Everything in moderation you know.»

Yes, I know, but you are not making sense. A desperate attempt at reducing cognitive dissonance is making you choose a bloody poor strategy.

Because the truth is that a strategy that seems like an extreme, might be your best choice, thus making all other choices poorer. Your notion of what is extreme is likely not based on knowledge of the field.

This is of course all a matter of perspective. I consider a diet based on whole grains, with 60% of energy from carbs, fruit five times a day and negligeble amounts of saturated fat, cholesterol and red meat, to be very extreme indeed. By others it is considered a safe choice or even an optimal choice.

But if grains affect youever so slightly  in a negative way, the belief that everything can be eaten in moderation, will lead to greater negative health effects than that seemingly extreme no grain diet.

Disagreeing professionals confuse us. Who should we trust? In our despair we opt for a mean. Yet the desire for optimal is just as strong. Often, the golden mean is so far from the optimal, that the positive health effects honor us with their absence.

So if disagreeing «experts» make you choose a middle way, know that you have not chosen the optimal way. And when the nutritionist or doctor advice you to eat everything in moderation, cover your ears and walk away.

Following general principles is a dangerous sport. General principles are just that, general. They don’t always apply. When it comes to diet, «everything in moderation» is not a good guiding rule. Optimal diet is optimal diet, regardless of our preferences or feelings. 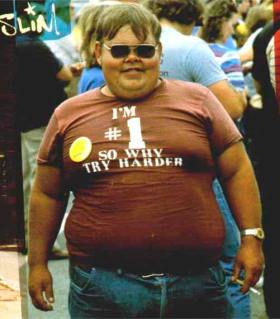