«The mechanisms by which protein may affect satiety remain elusive.»

“Although the immediate satiating effect of dietary fat may be comparatively weak, there is no doubt that ingested fat does inhibit feeding.”

LCHF opponents keep throwing out the same old argument, that fat is the least satiating macronutrient and that all that fat might thus make people hungry and unable to stay with the strategy. Eventually the low satiating effect of fat will cause people to gain weight. This is claimed despite the existence of several studies showing that people put on ad libitum high fat diets experience less hunger, lose weight and all over seem perfectly fine.

Protein, it is said, is the most satiating macronutrient. So the best dietary strategy is replacing fat with proteins and keeping carbs high.

My colleagues in dispute seem very eager to have me agree that protein is very satiating and that we at least should have this as common ground.

But my own experience urges me not to agree. If I reduce my fat intake and eat more protein, as I sometimes do, for example in periods of stress where I eat too much eggs and lean meat and forget about the fat, I feel horrible. My blood sugar drops and over time lethargy hits in. What’s more, I soon feel hungry and start craving fat/carb combos. Simply eating fat eases my symptoms. Eating carbohydrates would probably also ease my symptoms, but we all know that is no good long term solution.

So are proteins especially satiating?

Weigle is good for a laugh. Here’s from the introduction of the article

“Both low-fat diets (2– 4) and low-carbohydrate diets that are high in fat and protein have been shown to cause a decrease in ad libitum caloric intake and significant weight loss in humans. Thus, it appears that diets with fat contents at opposite extremes have the same therapeutic result, despite evidence that excessive dietary fat intake promotes obesity. This paradox could be explained if it is the high protein content rather than the lower carbohydrate content of low-carbohydrate diets that offsets the deleterious effect of high fat intakes and results in weight loss.”

Quite the paradox there. Hope someone will resolve it someday.

Weigle is often cited for showing that proteins are satiating. But measurements of hunger and fullness showed that even though hunger was reduced and fullness increased during the isocaloric diet, they returned to baseline with the ad libitum diet despite constant protein content. The reason the study is sited is because calorie intake dropped with higher protein. However, satiety and calorie intake did not seem to correlate.
As in all similar studies, the high protein diet differed from the low protein diet in many aspects even though carbohydrate intake remained constant. Below is an example of what the two different diets might contain. 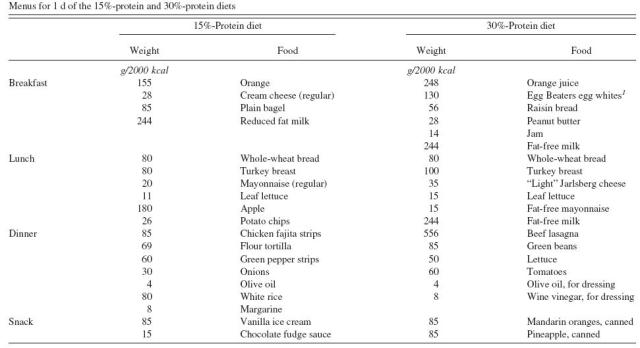 So can we conclude that the hunger (temporarily) and body weight dropped because of the higher protein content? Of course not. That would be silly. It might be the proteins, but it might be any one of the other differing dietary factors.

Weigle and colleagues also wrote that

“It is likely that a reduction in dietary fat by 15% of total energy contributed to weight loss in the present study.”

This is a very strange thing to claim, as several studies where subjects are put on high fat diets reports significant weight loss and reduced hunger.

“An increase in dietary protein from 15% to 30% of energy at a constant carbohydrate intake produces a sustained decrease in ad libitum caloric intake that may be mediated by increased central nervous system leptin sensitivity and results in significant weight loss. This anorexic effect of protein may contribute to the weight loss produced by low-carbohydrate diets.”

Skov et al [4] randomized 65 subjects to two ad libitum fat reduced (30%) diets for six months. One with 12% energy from protein and one with 25% from protein. Weight loss in the low protein group was 5.1kg and 8.9kg in the high protein group. By labeling the diet higher in protein a “high protein diet” our focus is drawn away from the fact that the high protein diet also had significantly less carbohydrates. This is a recurring problem; how should the diets be labeled? The labeling wouldn’t actually be problem if the researchers remembered to properly discuss the effects of reduced carbohydrate intake or reduced glycemic index. This, however, is often not done and when a diet labeled “high protein diet” is discussed the protein content usually get the major part of the attention.

Skov and his Danish research fellows later wrote that

“The mechanisms responsible for the larger weight loss caused by an HP diet may be attributed to a greater satiety and fullness, and also the thermogenic effect of protein.”

But of course, they might be right. A number of studies have compared hunger and satiety in the hours following consumption of a single meal, and have come to the conclusion that a high-protein meal is more satiating. So to say that a high protein diet suppresses hunger might be a correct statement, but it’s still a bloody unfair statement. Because what matters is the long term effect on hunger, and what actually cause the decreased hunger. The studies looking at single meal effects are usually poorly controlled and there are many confounding factors. Also, the protein content of high protein meals is often very high, ranging from 40% to 75%, and most of the studies have very few participants.

One of these studies, from Stubbs et al [5] (60% protein), found that there was no difference in subsequent energy intake despite acutely reduced hunger following a high protein meal. This was one of the more well controlled single meal studies.

“There are, however, some methodological issues concerning this type of research. Satiety appears to be influenced by a wide variety of factors including palatability, food mass, energy density, fiber and glycemic index. When using real foods, it is difficult if not impossible to control for all of these influences at the same time while still delivering different amounts of protein.”

Fat is often considered the least satiating macronutrient from these single meal studies. But it might not be that simple. Mark I Friedman found that hepatic ATP, or the energy availability of the liver, exerts a strong effect on feelings of hunger. What is important, is that there’s fuel available, be it glucose or fat. A theoretical satiating effect of proteins is their conversion to glucose by gluconeogenesis thus providing more fuel for the liver.

A quote from Friedman

“Hyperphagia associated with the development of obesity is accompanied by a metabolic state that fosters the deposition of fat in adipose tissue, the largest fuel storage compartment. This shift in fuel partitioning toward storage is independent of and occurs before the change in food intake in nearly every animal model studied. According to the model presented here, overeating results because fuels that would otherwise be oxidized to produce ATP in a detectable manner are redirected into fat stores.” [6]

And what redirects fuel into fat stores? I’ll leave it to you to figure this one out yourself. The point is that according to Friedman’s work, a higher fat diet will reduce hunger by making both glucose and fat more available for oxidation.

Daniel H. Bessesen [7] also believes that what separates obesity prone and those prone to leanness are differences in the trafficking of fat. He writes

On low carb ketogenic diets, hunger is often drastically reduced within a matter of a few days after initiation of carb restriction. With fasting or starvation we see a drop in hunger with increased ketone body concentration. This satiating effect is often attributed to the ketone bodies themselves, in particular beta-hydroxybutyrate, but according to Friedman’s theory it could just as likely be caused by the increased internal energy availability that occurs when lipolysis and fat oxidation (with a subsequent increased ketone body production) are increased.

Some studies also suggest that you will experience a stronger hunger if you eat some food as mostly carbs, than if you eat no food at all.
The belief that high protein diets are especially satiating seem similar to the belief that high fat diets are fattening. Of course they might be, but as I said, it would be a bloody unfair statement. In animal studies high fat diets often do cause obesity, but normally only in the presence of a substantial amount of carbohydrates (or crazy amounts of frankenfats). The term “high fat diet” does not imply minimal carbohydrates. High protein diets might decrease hunger, but higher protein diets are usually lower in carbohydrates, sugars and have a lower glycemic index. Attributing the decreased hunger to the proteins might be just as much off target as attributing weight gain to fat.

Halton and Hu illustrates this point when they term many low carb study diets, high protein, low carb diets. Like the much sited study by Samaha et al [8]. In this study the low carb diet was a 1630kcal, 22% protein, 41% fat and 37% carbohydrate diet. Protein intake was well below 1g per kilo body weight. It produced a greater weight loss than a 1576kcal, 16% protein, 51% carbohydrate and 33%fat diet. The results can hardly be attributed to the proteins alone. Holtan and Hu, in their review of high protein diets and satiety, forget to discuss the potential long term satiating effects of increased fat intake.

“Fat seems to be less satiating than carbohydrate and might therefore lead to passive overconsumption [4]. Yet, in rodents, the efficacy of a high-fat diet to induce hyperphagia appears to be related to the energy and carbohydrate content of the diet. Therefore, overeating of high-fat diets is presumably not due to the high fat content alone. This assumption is in line with recent studies in humans showing that a high-fat, low-carbohydrate diet reduced rather than increased voluntary energy intake.”

Leonhardt continues to suggest that overeating on a high fat diet might be, amongst others, due to

“the usually low postprandial oxidation of ingested fat in the presence of carbohydrates.”

That protein exerts some acute satiating effect compared to carbohydrate and fat is hardly a good point. It is an interesting observation, but not an argument in favor of high protein diets. People put on high fat low carbohydrate diets also feel their hunger disappear and shed weight without caloric restriction. The high protein diets seem to stem from the cognitive dissonance of the upholders of the traditional dietary dogma. First fat was fattening, now it seems carbs are equally so. What they are left with are diets low in both fat and carbohydrates, diets that do not consider any of the important roles of the vast variety of fatty acids available to the body. I’ll eat my hat the day some anthropologist can show me a traditional human population thriving on a high protein, low fat, low carbohydrate diet. Fat matters.